Plan to turn night into day

Russian scientists are planning to put what will appear to be a
second moon, 10 times as bright as a full Moon, into the night sky above
London and other cities in November as part of a scheme to end night-time.

The orbiting space mirror will pass across the night sky quickly, up to
16 times in 24 hours, but will last only one night - Nov 9 - before burning up
in the atmosphere, according to a report in the Electronic Telegraph.
The reflecting spacecraft, Znamya 2.5, is part of a Russian-led consortium's
plan which bears some similarities to the plot of the James Bond film
Diamonds Are Forever.

After the one-night feat, the Space Regatta Consortium, led by Energia of
Korolev, near Moscow, wants to launch a constellation of several hundred
mirrors, each up to 100 times brighter than the full Moon.

They will cast sunlight from the far side of the globe into the darkest
corners of Siberia during the Arctic winter and make city street lights
obsolete.

But the proposal has alarmed environmentalists.

Mr Daniel Green, of the Harvard-Smithsonian Centre for Astrophysics, said:
"I cringe to think that we could lose the night sky because of all these
companies with brain-dead ideas."

Mr David Thomas of Bangor University said almost any ecosystem "would get
completely screwed up" and that the permanent daylight could cause more
Arctic ice to melt.

He said plants and animals depended on darkness. "Everything -- sex, movement,
feeding -- is triggered by day-length," he said. 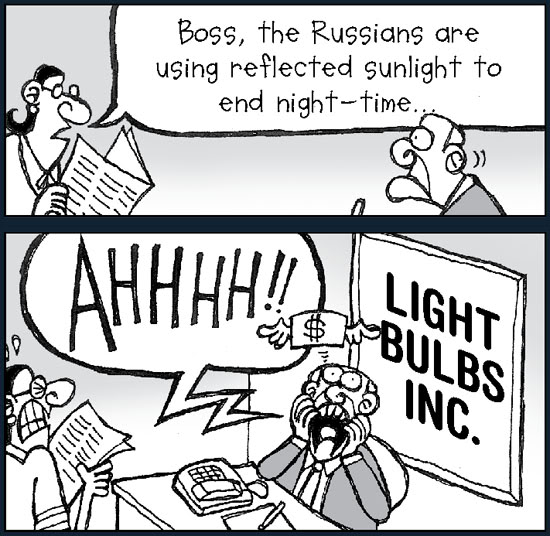