The Pentagon is developing a stink-bomb that would drive away
hostile crowds by unleashing an odour that creates panic in the ranks.
The new device will be part of a growing arsenal to tackle the increasing
number of violent protests against globalisation.

Researchers working on the project said there was a close link between a
particular kind of smell and fear, and that a particular odour could activate
tissue deep within the brain.

The aim would be to use such a smell to send demonstrators fleeing in panic.
"It would give us an offensive capability against large and unruly groups of
people, if they are unwilling to move or are openly hostile," a Pentagon
spokesman told the New Scientist magazine, which published details of the
invention this week. "And it would minimise the risk to our people and to the
antagonists."

Resolving situations like out-of-control crowds can be a dangerous process
for the police, suspects and bystanders alike.
To reduce the risk, scientists have tried to devise weapons that can be used
without deadly force. 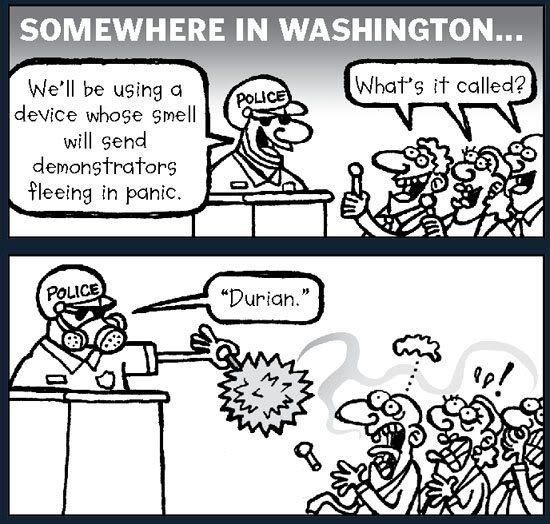