People who feed monkeys cause more harm than good, and anyone caught
doing so will be fined S$3,000.
(Please disregard the "S$250" part in the photo... the fine had increased
12-fold since this report was last published!) 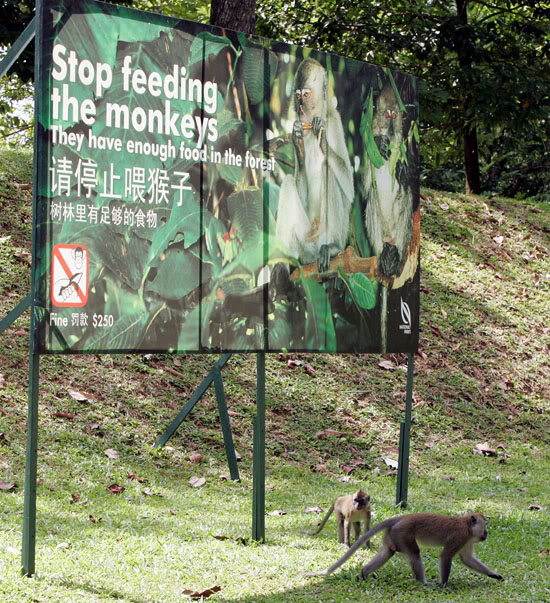 To ensure that people get the message loud and clear, the National Parks Board
(NParks) is conducting regular raids, apart from monitoring closed-circuit
television cameras which were installed along Upper Thomson Road last year.

The "strong stand" is necessary because feeding monkeys creates several
problems. They become bold and aggressive, snatching food from people,
and even attacking them. Often, people who live on the fringe of nature
reserves bear the brunt of this behaviour.

The monkeys also become reliant on humans, a habit which can be fatal.
Between 2001 and 2005, more than 100 wild monkeys were run over
on the roads while waiting for humans who would feed them.

Feeding leads to a baby boom, too, with the population surging as they
spend less time foraging for food in the forests and more time engaging
in breeding activities.

The following week, I based my Sunday strip on the report above.
Soon, NParks contacted me to inquire if they could use the cartoon
in their parks and I said okay.

This is how the poster turned out: 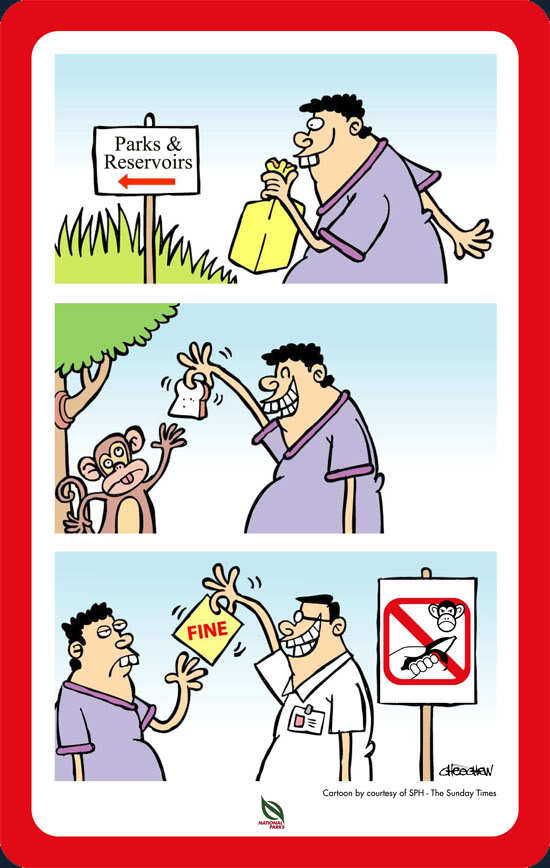 When NParks asked what token they should give me for my service,
I excitedly asked for a horde of monkeys as payment.

Imagine! I can attach faux wings on them, put on my impersonation
of that delirious Wicked Witch of the West (from The Wizard of Oz),
and scream like a banshee,"Now, fly! Fly! Bring me that girl
and her slippers! Fly! Fly! Fly!"

But, alas, it wasn't meant to be. Monkeys cannot be used as currency.
In the end, I asked for a donation and received a cheque of S$150,
which I have forwarded to my cause.

So, thank you, NParks, for helping Thien Nhan.