One fine day, I got a call from David Goldwich, a trainer in
communications and management. David is from Miami (Florida)
and is now based in Singapore. He had published a book called
"Why Did the Chicken Cross the Road?: Lessons in Effective Communication"
and is releasing a second one, which is a collection of humourous essays
about his ten years in Singapore. And he would like someone to help
in doing up the book cover.

After reading the manuscripts he sent me, I recommended my friend
and colleague Miel, whose style suits the tone of David's writing
very well. Here is how the cover looks like: 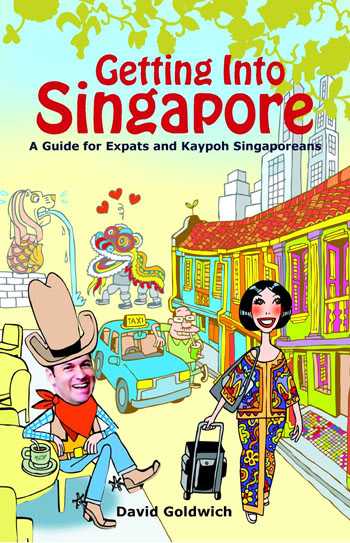 And here is an extract from the book, a piece entitled 'Singapore Girls'.
I crack up every time I read it! --

Even before I arrived in Singapore I had heard about the legendary
Singapore Girl. I knew that she had perfectly coiffed hair and used
just the right amount of makeup. I knew of her warm and inviting smile.
The Singapore Airlines stewardesses (no need to call them
'flight attendants' here) are the best in the world. The Singapore Girl
is an icon in aviation circles. They are the most polished, courteous,
and solicitous women ever to push a beverage cart. I have been told that
there are 500 applicants for every position. Their uniform, called the]
sarong kebaya, is derived from a traditional Malay costume, and is only
part of their heavily regimented appearance. No detail is overlooked.
The result is nirvana for the weary traveler. These ladies are beautiful,
refined, and sexy (in a wholesome, sophisticated way, of course).

By the time I arrived at Changi Airport I was exhausted from my
thirty-hour journey. The Singapore Girl was of no help to me --
I didn’t fly Singapore Airlines. The airline that brought me across the
Pacific is regulated by enlightened laws requiring it to be politically
correct. This means that if a cow can walk on two legs it must be hired,
or the airline could face a huge lawsuit. Fortunately, the crew working
the Tokyo to Singapore leg of the trip was composed of local talent --
no doubt Singapore Airlines rejects, who are still well above average.
Thus I arrived in good spirits.

As I walked through the terminal I got my first glimpse of the
Singapore Girl, coming out of another gate in her sarong kebaya,
rolling her luggage behind her. She was lovely, and right then I vowed
that I would have a Singapore Girl of my own.

I had already arranged to take a flat, but as it was after midnight
it was too late to collect the key. I would have to spend my first night
in Singapore in a hotel. I knew that some of the hotels here were
very expensive, and as I would only need it for a few hours, I asked
the cab driver to take me to the cheapest hotel. He took me to a place
called Geylang. As soon as I got out of the cab I was approached by
a very pretty girl in a very sexy dress. She asked me if I would like
a date with her. I was very tired after my long flight, so I told her
perhaps another time. When I got to the door of the hotel I was approached
by another very pretty girl in a very sexy dress. She also asked me
for a date. I gave her the same excuse, but I was quite flattered.
I had only been in Singapore for 40 minutes and I was already a hit
with the ladies. As I lay in bed that night I thought to myself:
I’m going to like it here! I’m going to be very popular!

I awoke early the next morning, eager to get my flat and begin my
new life here. I spent most of the day shopping for furniture and
household items. I was going to be doing plenty of entertaining at home,
and I wanted a swinging bachelor pad worthy of Austin Powers.
After everything was squared away to my liking I went downstairs to
check out the local action. There were a couple of pretty young women
sitting on a bench, chatting. A couple of hot prospects! I knew how
to play the game in this town: Just show up and let them approach me.
I walked past them slowly and -- they didn’t say a word. Perhaps they
were not prepared for me, I thought. I walked past a second time,
slowly and deliberately. Again, they said nothing. I decided to make
one more pass and confront them directly. I walked right up to them
and said hello. They answered politely and then -- nothing.
"Well," I said, "aren’t you going to ask me for a date?"
They looked at each other and said "Siao!" I didn’t like the sound of that,
so I walked away, my ego slightly bruised.

Perhaps a Singapore girl was not in my future. Perhaps I should
stick with what I know best. But where would I find a western girl
in Singapore? I didn’t know my way around yet. Back home, if I wanted
to meet a Chinese girl I could go to Chinatown. If I wanted to meet
an Italian girl I could go to Little Italy. Where could I meet a
western girl in Singapore? I looked at the map and found what seemed
to be the perfect place: Ang Mo Kio. I got on the MRT and alighted at
the Ang Mo Kio station. As soon as I scanned the platform I realized
my mistake -- I was the only ang moh in Ang Mo Kio. I started to panic.
The Asian girls ignored me, I didn’t know where to find western girls --
it looked like I would be all alone in my new bachelor pad.

The next morning there was a glimmer of hope. It was Sunday,
and I was awakened early in the morning by the sound of an old-fashioned
bicycle horn. Honka honka! Honka honka! Who could be riding a bicycle
at such an early hour, I wondered? I asked Auntie Soh, the elderly
Chinese lady next door. She told me in broken English that it happened
every Sunday, it was someone named Karen -- Karen Gooney.
Ah, a western girl, I thought. She must be very beautiful if this auntie
even knows her by name. I imagined a tall, shapely girl riding her bicycle,
her long blond hair billowing behind her. I decided I would meet
this early morning cyclist.

The following Sunday I was up before the sun. I got dressed nicely
and went down to the void deck to wait. Soon I heard the sound
I was waiting for. Honka honka! Honka honka! I looked around but
did not see a bicycle, or even a trishaw. The only thing I could see
that had wheels was a dilapidated pushcart filled with old newspapers.
There was no sign of Karen Gooney.

For weeks I woke up early every Sunday and went downstairs to wait,
but I never did meet this mysterious blond beauty, this Karen Gooney.

The book "Getting Into Singapore -- A Guide for Expats and Kayoh Singaporeans"
is available in the stores. To find out more, you can contact David via his blog.

Oh, after Miel had done the cover, he suggested that he should be
paid in the form of a donation to Thien Nhan, and David promptly
contributed S$500 towards helping the toddler.