End may be near for banana

It is one of the world's favourite fruits, but the banana hasn't had
sex in years and its days may be numbered.

Without scientific help, the sterile, seedless fruit could disappear within
10 years, according to a Belgian plant pathologist.

The fruit lacks the genetic diversity needed to combat diseases and pests.
Only biotechnology and genetic manipulation may be able to save it, New
Scientist said.

The fruit is a genetically decrepit sterile mutant. Among the world's oldest
crops, the first edible variety was bred 10,000 years ago from a rare mutant
of the virtually inedible wild banana.

Because all are effectively clones of that first plant, they cannot evolve to
fight new diseases.

Black sigatoka, a fungal disease that cuts yields by up to three quarters and
reduces the productive lives of banana plants from 30 to only two or three
years, has become a global epidemic.

Without help, production could drop and mark the beginning of the end of the
fruit. "We may even see the extinction of the banana," New Scientist added. 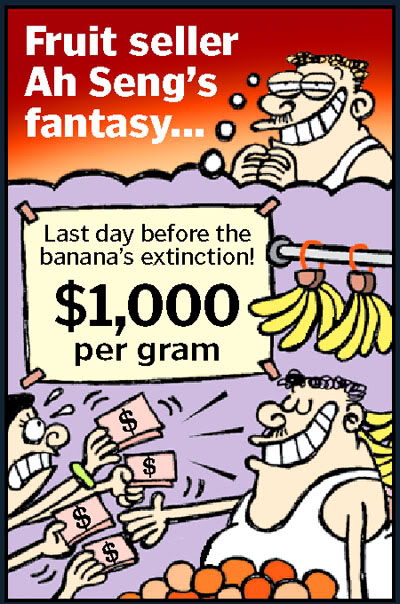