They know what "kiasu" means, but not what the crescent moon and five stars
on the Singapore national flag symbolise.

Don’t count on Singaporeans to name you their first elected president either,
although they may have no difficulty coming up with the name of a Singaporean
brand.

When it comes to testing their understanding of their country, Singaporeans
are hardly anywhere near the top of the class. What’s more, they don’t fare
much better than new citizens and permanent residents.

A questionnaire comprising 10 questions ranging from Singapore’s history
and politics to its culture was presented to 100 Singaporeans and 100
new citizens and permanent residents.

Taking 75 per cent to be the passing grade, an astonishing 85 Singaporeans
didn’t make this cut, while as many as 90 new citizens and permanent residents
who have plans to become Singaporeans also failed.

The question that stumped both groups was who Singapore’s first elected
president was. Only one in four Singaporeans and new citizens or PRs correctly
named the late Mr Ong Teng Cheong.

Nearly half of the Singaporeans named Mr Yusof Ishak, the country’s first
president. Some not only got the answer wrong, they couldn’t even muster Mr
Yusof’s name.

Both groups also did badly when it came to reciting the pledge and pinpointing
the year Singapore became an independent nation.

Another head-scratcher: the national flag.

Half of those Singaporeans polled and nearly 70 new citizens had no idea what
the crescent moon or any of the five stars symbolised -- only one person knew
all. One response that kept cropping up: "The five stars represent the five
races in Singapore."

It was enough for a cab driver to protest: "I left school so long ago.
You should ask students, they will know better."


For the above article, this drawing of mine was used: 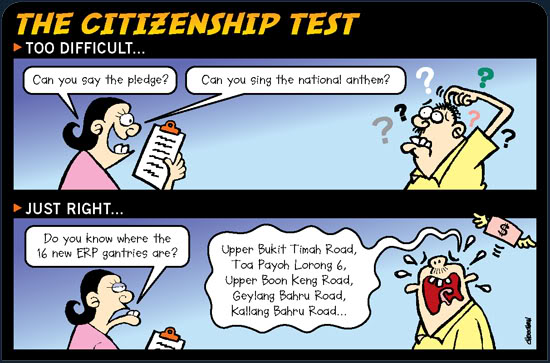 It was a second choice, really. My first concept, which I like so much,
was rejected by the editor. 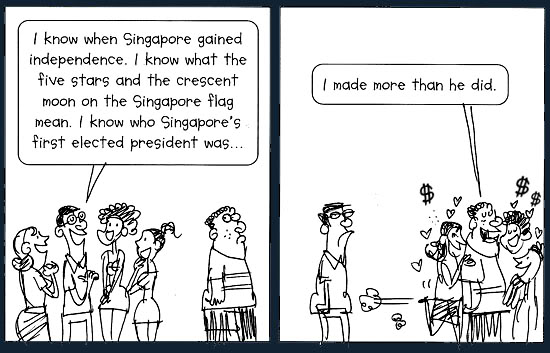