In Kuala Lumpur, shortly after a police chief spoke at a gathering of police
officers, in which he said that the police would arrest reckless drivers to combat
the increasing number of road accidents, a lorry turned into a "no entry" road.

When the driver defied the police chief's order to stop, a chase ensued during
which the lorry driver tried unsuccessfully to ram into chief's car.

He then noticed the lorry driver bending down and grabbing something.

Not taking any chances, he took out his revolver and fired a a warning shot,
but the lorry driver became hostile, forcing the sergeant to shoot him in the
leg to effect arrest. 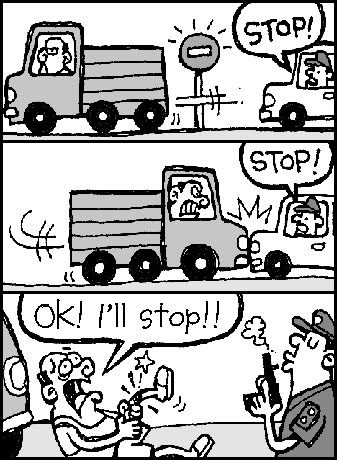