British scientists have said they have developed a vaccine which
could put an end to tooth decay and do away with the misery of
the dentist's drill. The vaccine is painted onto the teeth and
is safe for adults and children.

The plant-based vaccine produces antibodies that prevent harmful
bacteria from sticking to teeth and causing cavities.

The development would lead to the end of tooth decay and the vaccine
could be available in about four years.

The achievement marks the culmination of 25 years of research.

In a preliminary trial, 15 dental students and other volunteers had
the vaccine dripped over their teeth twice a week for three weeks.

The treatment was then stopped and it was found that four months
later the volunteers were still protected against tooth decay.

The scientists believe protection could last much longer.
Larger clinical dental trials are to start later this year. 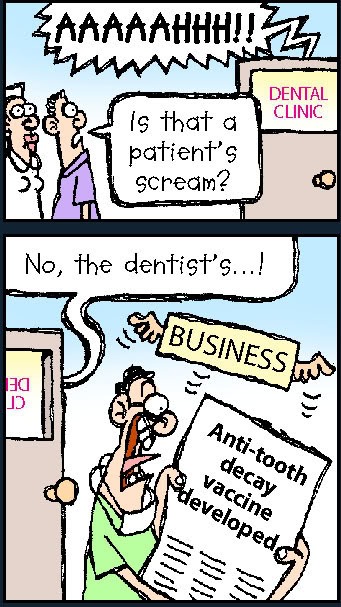