Some bestselling authors in Britain are giving their own novels
glowing reviews on Amazon by pretending to be readers,
and the Internet bookseller is trying to put a stop to it.

According to a report in The Telegraph, authors Jane Green
and Isabel Wolff, two of the leading lights of the so-called
'chick lit' genre popularised by Helen Fielding's
Bridget Jones's Diary, are among those who have given themselves
'five star' reviews to boost sales.

Both have admitted to posting bogus reviews in the section of
Amazon's website where readers can submit their opinions
of a book anonymously and award it between one and five stars.

Amazon, which has 3.3 million customers in Britain alone,
said it was trying to find ways to curb the abuse.

"We will investigate any complaint we receive concerning a review,"
a spokesman said. Green, who has written five bestsellers,
admitted faking a number of favourable reviews for two of her books,
Jemima J and Mr Maybe, signing them 'A reader from West London'.

She said: "I did it because I could not bear the abuse,
the vitriol of the reviews from other people. As a novice author,
I took criticism more to heart and became deeply wounded
by these reviews."

In response to a hostile review which dismissed her novel as
"a must for self-obsessed, materialistic, shopaholic social climbers",
Green wrote an anonymous five-star review which called the book,
about a young woman looking for a rich husband,
"a wonderful escapist read - perfect for a holiday".

Wolff, who has also produced several bestsellers,
confessed to writing a few complimentary reviews for her book
The Trials of Tiffany Trott, The Telegraph reported.

But other authors said they could understand the need to
defend one's work. Robert Harris, the author of Fatherland and Enigma,
told The Telegraph: "Anyone who has written a book would love to
write their own reviews if they thought they could get away with it."

Michael Holroyd, the biographer and novelist, said:
"This sort of thing existed in the old days before word processors.
Anthony Burgess reviewed his own books under a different name.
All's fair in love and publishing." 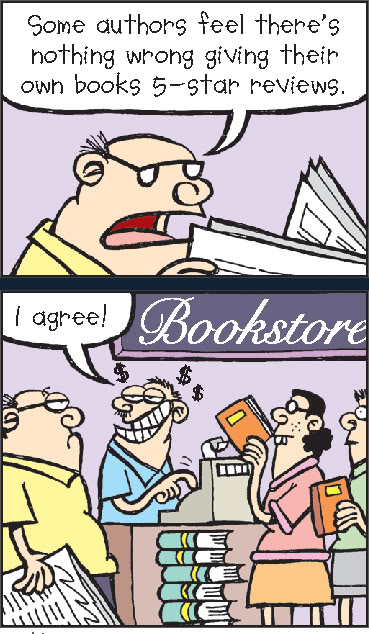