The challenge: Eat, sleep and play in a moving cable car with
three others for seven consecutive days with only a
10-minute daily break.

Beginning on March 16, 36 two-member teams from six countries
will take part in 'Surviving the Sky', a week-long competition hosted
by Singapore Cable Car (SCC), in which participants will try to
outlast the others while confined to a moving cable car.

Two teams, each comprising a man and a woman, will be housed in
one cable car. While three meals a day will be provided, each participant
will be given only three litres of drinking water and toilet breaks will be
capped at 10 minutes per team.

Minimal personal comforts will be provided -- one blanket and pillow
for each team. Luxury items such as telecommunication devices and
extra pillows are not allowed. The teams will also have to do various tasks.

The points awarded will be taken into account in the event of a tie.
Teams will be disqualified if members are medically unfit to carry on
or if they exceed the time allocated for breaks. 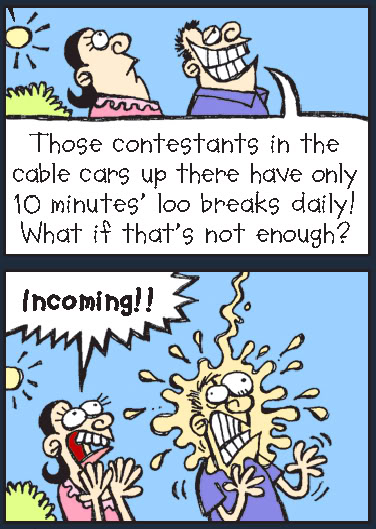