Who says they don't want to get married?

A recent government survey showed that single women in their 30s are least
likely to think that marrying and having children is better than staying
single. But according to seven matchmaking agencies and seven singles
interviewed, women in their 30s do want to get hitched.

A founder of a matchmaking agency offered one reason why the survey results
turned out the way they did: Some well-educated, financially-independent women
faced a psychological barrier about admitting that they want to get hitched.

"How to announce to the whole world in a survey that I'm lonely and I need
someone?" she said.

According an owner of another matchmaking agency, some women can get
downright anxious about not tying the knot.

He said: "I have seen thousands of ladies. The moment they hit 30, they
realise their biological clock is ticking away and they get kan cheong
(anxious). When they are 35, they get really stressed out.
When they reach 40, they give up."

Far from thinking that staying single is better than getting married, some
single women say they want to share their lives with someone.

A 35-year old regional retail manager said: "No matter how career-minded
we are, we still want to be loved and pampered by our husbands.

Have you ever tried living alone and falling ill? And there's nobody to
give you medicine? You must be crazy to want to stay single.

And every woman has sexual needs."

So in comes the matchmaker, to speed up the dating and matrimonial process.

More women are signing up at certain periods of the year: Valentine's Day,
Christmas, Chinese New Year and on their birthdays - occasions when loneliness
can really hit hard.

A director of a matchmaking agency said: "These are the times when
they sit down and review their lives, to see what they have done for
themselves besides work."

The singles interviewed also denied being choosy. They said it is the men
who are picky, and this seems to be borne out by what the agencies said.
From their experience, men look for attractive, young women -- with an
emphasis on looks and age. They shy away from aggressive and capable women.

But despite the gloomy scenario, some women have found love through these
matchmaking agencies, and it is these success stories which give singles hope.


MANHUNT
So many men, so little time.
Are you female, thirtysomething and still on the shelf?
Don’t get kan cheong -- get hitched instead, with this useful guide: 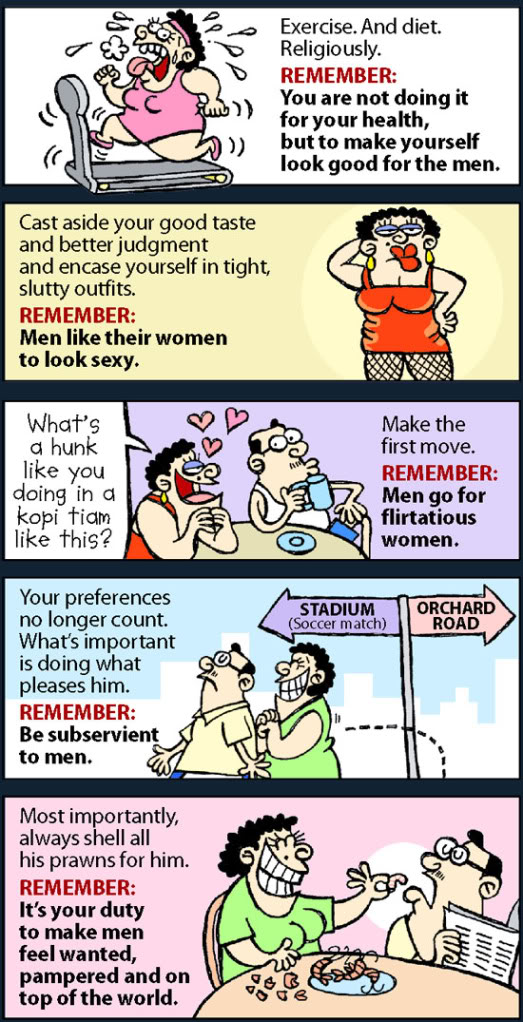 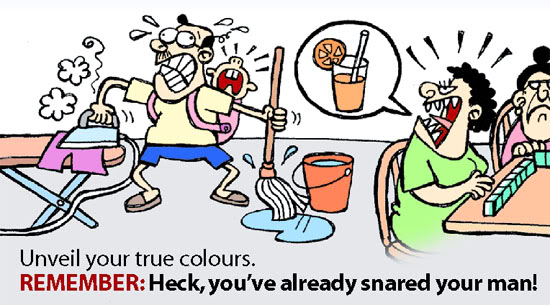