One man lay slumped on a sofa, his shoes off and his feet up
on a coffee table, as he flipped through a book. 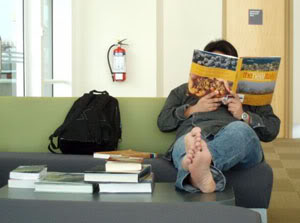 Another man whipped out a pair of tweezers and
nonchalantly plucked at his stubble, dropping
tiny hair strands on the newspaper he was reading. 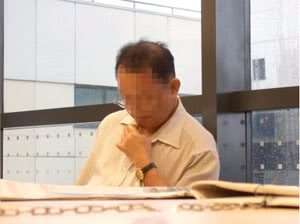 No, these two were not relaxing at home. They were
at the public library -- and if one peeved library user had
got his way, they would have been sent for etiquette classes.
The said library user wrote to a newspaper saying
uncouth acts such as people resting their feet on chairs,
fiddling with their toes and nose-picking were common
in libraries.

Apart from the fact that such actions are inconsiderate
and rude, he wondered whether they were hygienic.
A visit to four public libraries found plenty of proof to
illustrate his point.

Library users, both young and old, were spotted sticking
their fingers into their ears, removing the wax and
flicking it onto the floor. 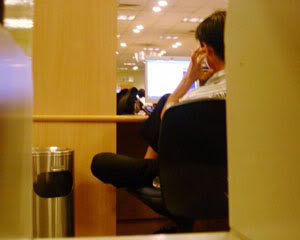 Others scratched their toes and armpits. Many were
fond of taking off their shoes and putting their feet up. 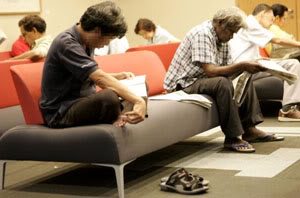 When approached, most of them saw nothing wrong with
their actions. The man with the tweezers said grooming
his stubble in public was a habit he had indulged in for
the past 10 years.

Another reckoned he was being courteous by taking off
his shoes before putting his feet up. He said, "To me,
the library is a homely place. Maybe those who don’t like
what we do should be given a separate area of their own."
The National Library Board (NLB) says that in 2005,
there were more than 20 letters in various newspapers
complaining about the lack of library etiquette among users,
a threefold increase from the year 2004.

NLB spokesman said it was difficult for library staff to police
library users who, for example, picked their noses. But staff
and volunteers do tell users not to remove their shoes.

Following this report, NLB commissioned yours truly to
come up with two "I LOVE MY LIBRARY" posters to encourage
good etiquette in libraries.

However, only one is displayed in NLB premises: 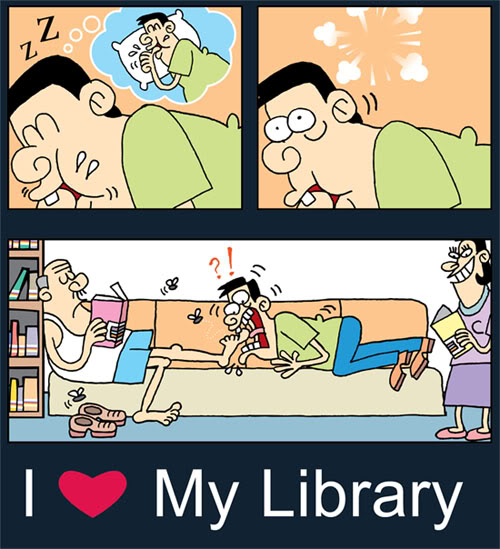 The second poster is not used because NLB is unsure about
library users' reactions upon seeing it.


To make your trip to my blog worth your while,
I shall now show you the poster that is otherwise banned from
the public eye: 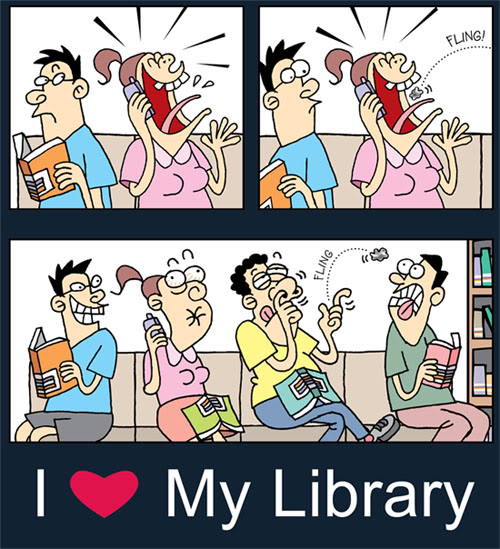 So... would you mind if NBL puts up this poster?
Leave your thoughts in the "Comments" section.