After a local TV screened the show Breaking The Magician's Code,
it received a protest letter from the Singapore Association of Magicians,
to which the TV station replied that the exposures depicted are of
"entertainment value" to viewers and that magic secrets are already
available to all and sundry in the public libraries.

Here is an excerpt of a follow-up response from the president of
the International Magicians Society:

"The reply given shows a wanton disregard for magic as a performing art and
condonement for the exposure of magic secrets for the sake of increased TV
viewership.

Ethics aside, the TV station has knowingly damaged the rice bowls of many
professional and semi-professional magicians in Singapore.

We all know about how canned applause, laughter, sound effects, aerial
fighting, and gun battles are engineered in the movie industry.

But should all these "secrets" be exposed in the name of public
entertainment?

Like music, opera, painting, ballet, juggling, clowning and mimicking, magic
is an age-old performing art.
Apart from breaking rice bowls, exposure of magic secrets takes the wonder
and fun out of the art." 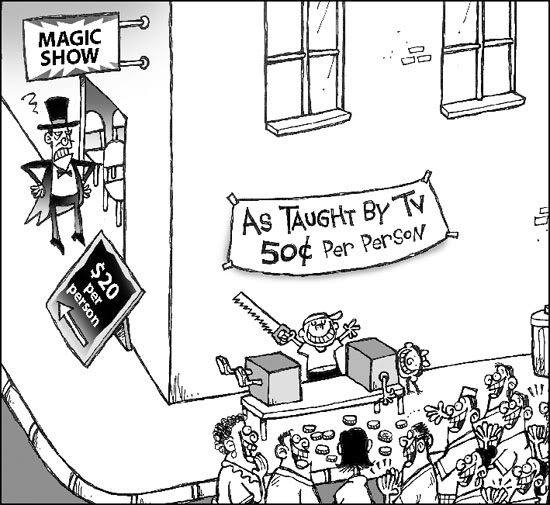