Mindfulness Singapore, a program which integrates Tai Chi, Qigong and
Mindfulness Meditation to help individuals in their career growth and
development, collected S$1,320 for Thien Nhan during one of its events. 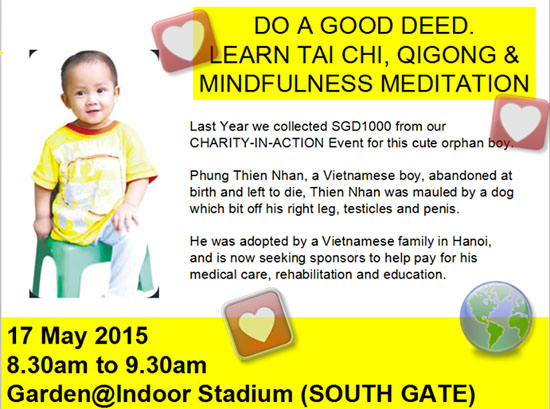 Thank you, members of Mindfulness Singapore, and its trainer and coach,
Mr Colin Koh. 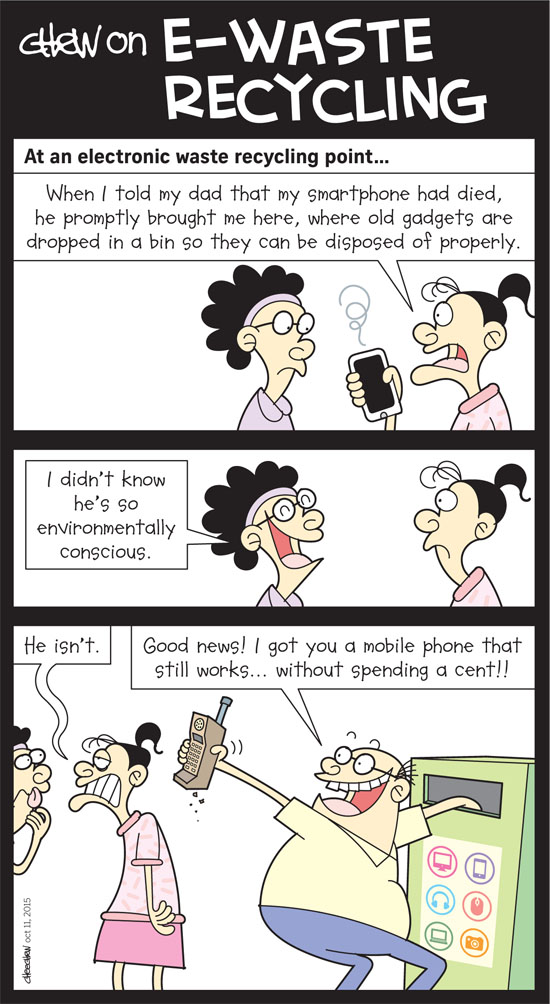 After the above strip was published, I received this email:

"Thank you for featuring the RENEW (REcycling Nation’s Electronic
Waste) bin, or a facsimile of one, in your comic on e-waste recycling
on 11 October 2015 in The Sunday Times.

Like all other types of waste, electronic waste is a growing problem
and the partners of RENEW -- DHL, StarHub and TES-AMM -- would
certainly like more members of the public to be aware of the need
to recycle their e-waste and to use the RENEW bins for that purpose.

I would like to raise a concern, however. Your comic depicted the father
retrieving a used mobile phone out of the RENEW bin. You would not have
been aware of this, but many site owners have asked us about the dangers
of such theft from RENEW bins, as personal data may still be on those
electronic devices. I suspect there are many others out there who have
the same concerns and I am worried that your comic may now have dissuaded
some from recycling their e-waste with RENEW because of this.

Again, you probably did not know this but each RENEW bin has
an inclined ledge installed just inside the deposit slot.
This makes reaching in and stealing far more difficult as the ledge
makes simply reaching in and down an impossibility.

Is there any way in which this can be communicated,
or any negative effects of your comic be mitigated, in case the public
assume that theft from RENEW bins is easy?

So, environmentally-friendly folks: rest assured that your binned
gadgets cannot be easily retrieved from the bins by unscrupulous people.

However, it's still advisable to wipe out all data before getting rid
of your unwanted devices.

Get rewarded for catching a litterbug?

On 13 October 2015, the newspapers reported that
one Member of the Parliament made a suggestion to the
National Environment Agency to implement a reward system
like that in Taiwan, where people are given a portion of the
summons payment after they submit evidence of litterbugs
caught in the act. 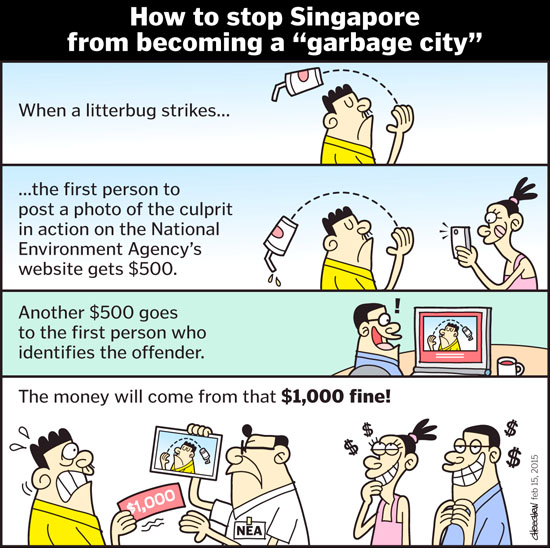