Dangers of the greenhouse effect

Scientists say that global warming, if continues unabated, will cause
temperatures to rise by 2 deg C and water levels to go up by 30 cm
in the next 50 years. 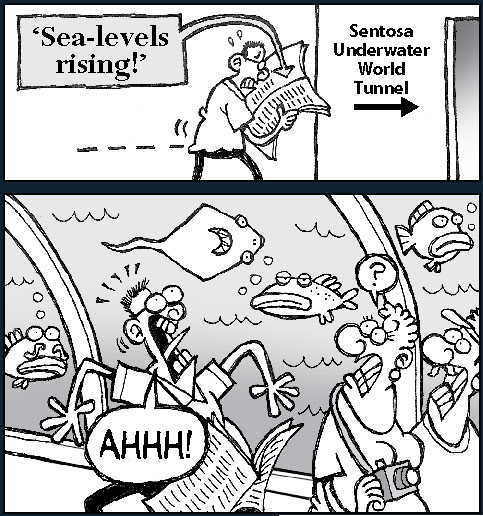 Only one reader made the cut -- 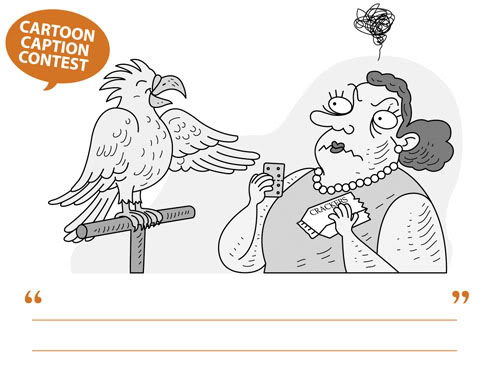 The winning entry:
"I’m not going with you to the owner-pet lookalike contest.
So stop feeding me a lot!"
- R. M. Kasthuribai

A local entrepreneur successfully breeds an odourless durian
that Singaporeans can finally get to swing home on the MRT. 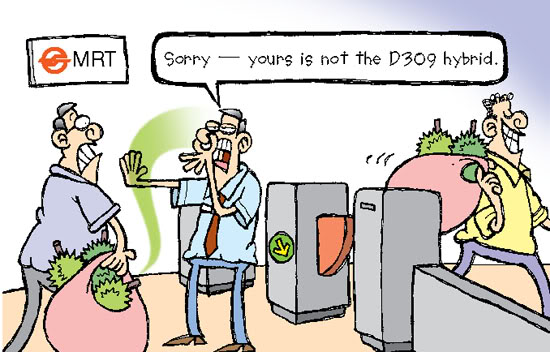 Many funny submissions for this one. Enjoy! 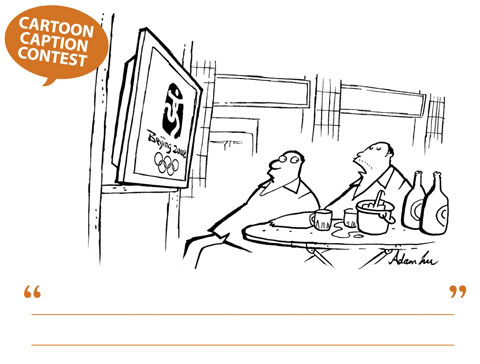 The winning entry:
"During my heyday selling pirated VCDs in the 90s,
I was actually clocking better timings than Usain Bolt..."
- Keith Chong Kee Seng

The shortlisted ones:
"Be patient. This is the Olympics,
so you would expect a 'Marathon Commercial'."
- Linda Lo Chee Yong

"Why am I here every night?
My doctor advised me to take up as many sports as I can."
- Stephen See

"My wife is complaining that sitting here all day
drinking beer is turning me into an Olympig."
- Chua Shi Min 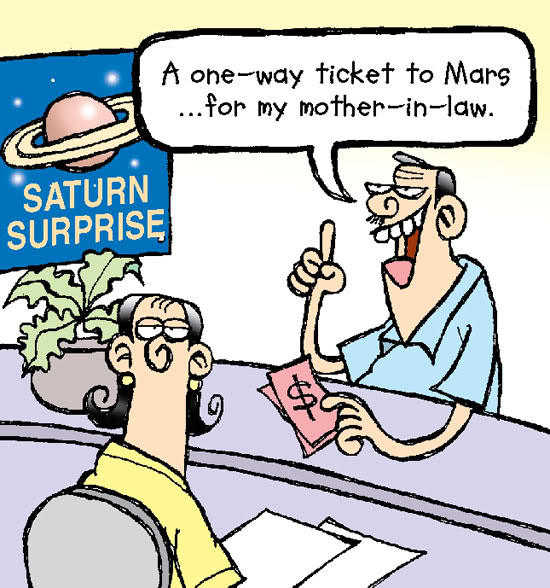 All flats' windows have glass canopies which allow the sun
to shine through but keep out drips from wet laundry above. 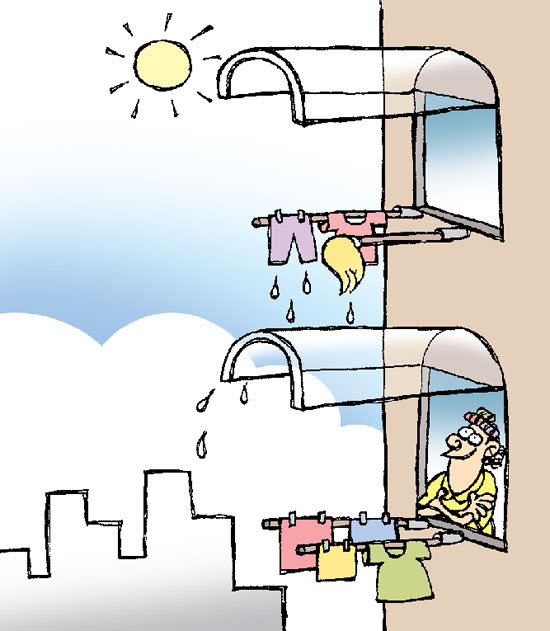 PS: ICI actually contacted me regarding the above contraption...
unfortunately, it didn't materialise. 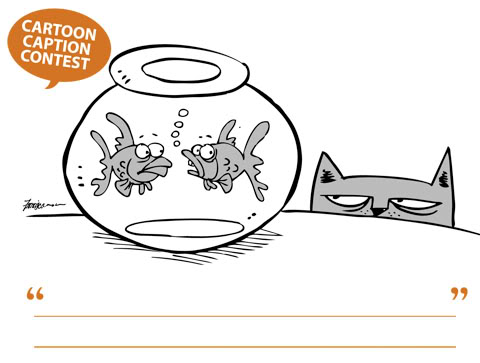 The shortlisted ones:
"I have not eaten for days.
Can you help to lure him into our tank?"
- Sim Kwang Seng

"Luckily, his head is bigger than the rim of the fish tank."
- Lim Ai Tiong 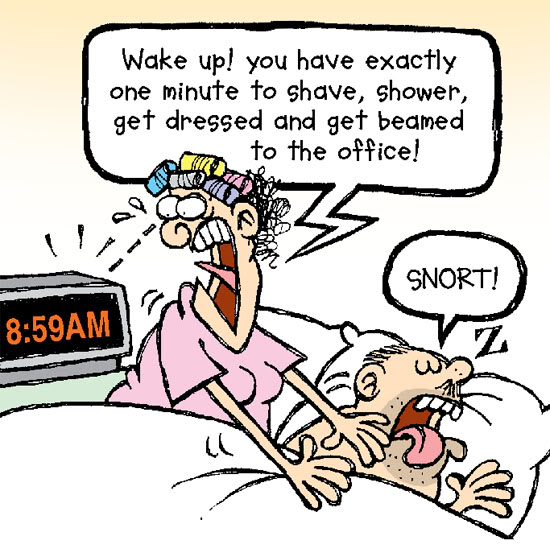 Slim pickings this time round: only one made the cut -- 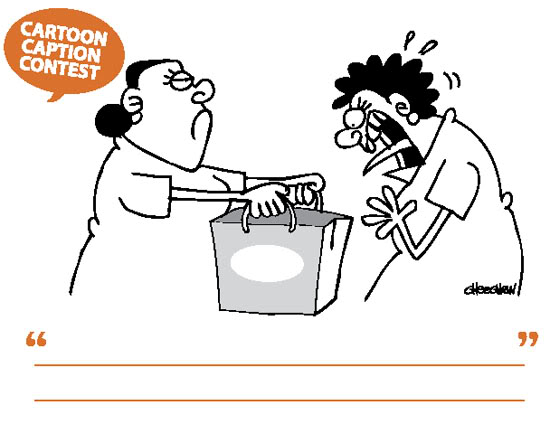 The winning entry:
"Boss thinks that we are not fashionable enough.
So here are some tights and mini skirts... let’s go change."
- Victoria Lee

Every household has solar cell panels
to trap the sun's rays for use during night time. 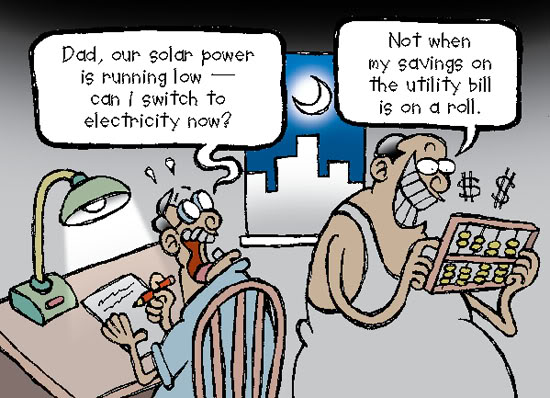 Amongst the many preparations are safety drills. 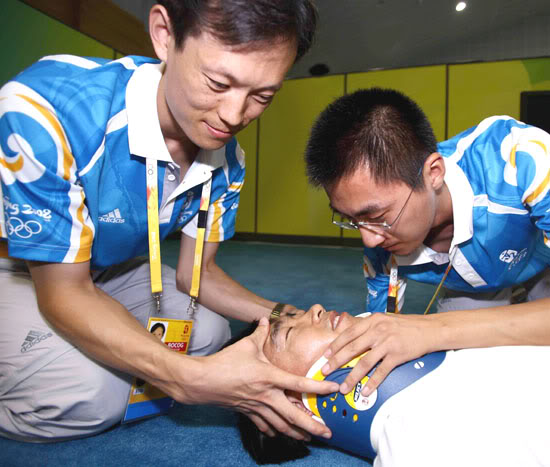 I can't resist manipulating the photo... 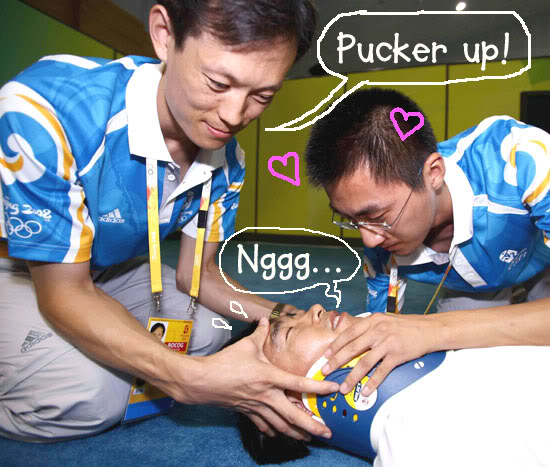 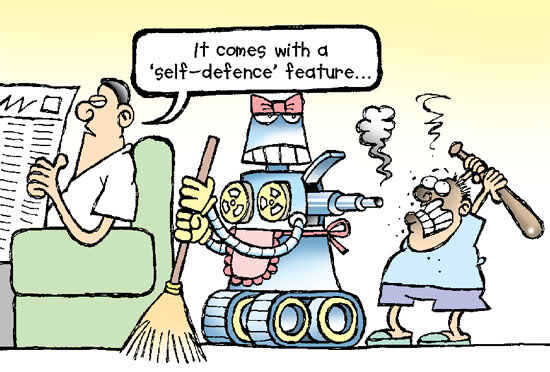 While he was in Hanoi, Adarsh made two trips to visit Thien Nhan and his family.
Here are more pixs... (By the way, the stuff you see on the right of Thien Nhan's
head is some medicinal paste.) 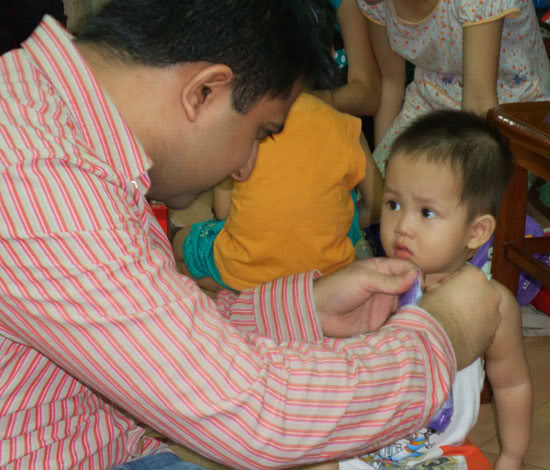 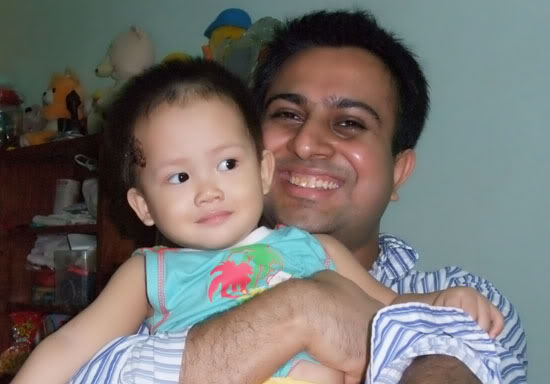 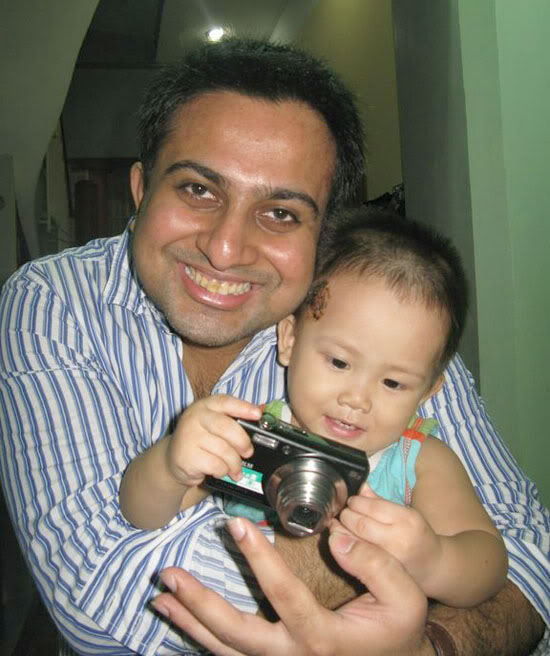 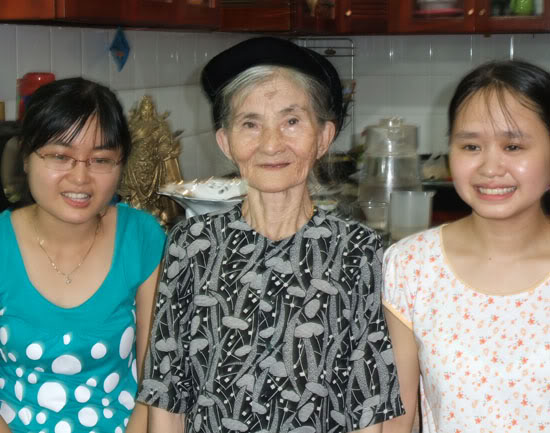 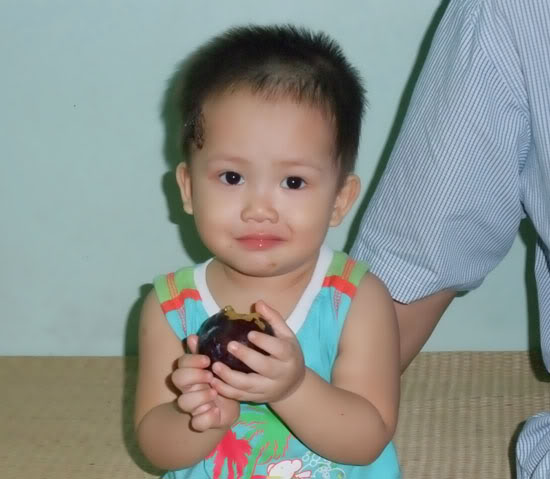 Thien Nhan enjoying a nice large Vietnamese plum,
which Adarsh's dad purchased for him from a fruit market in Hanoi. 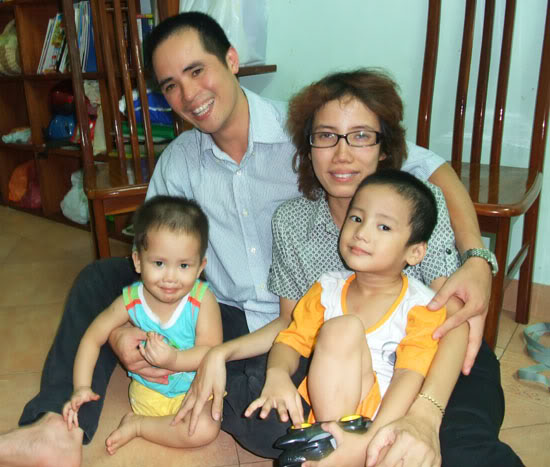 Thien Nhan with his dad, mum and brother Little Minh
(Big Minh was not at home at that time). 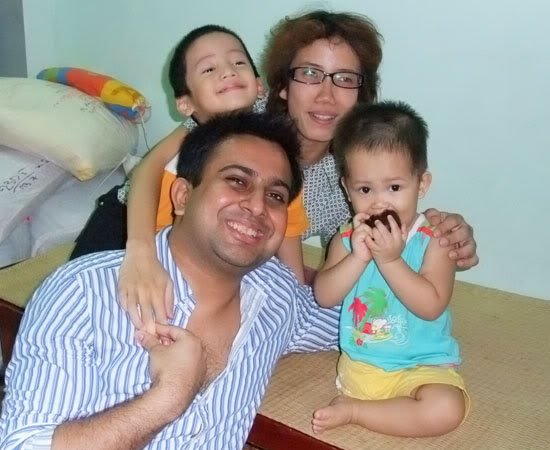 Thien Nhan with his mum, brother, Adarsh... and another plum!


Upon returning to Singapore, Adarsh said, "Thien Nhan's grandma,
mum (Mai Anh) and dad (Nghinh) are very, very nice and kind people!
I thoroughly enjoyed my two visits there and I can't wait to go back again."

A friend of mine, Adarsh was in Hanoi for business with his dad. Both of them
made a detour to visit Thien Nhan & family... and took a shine to the little guy. 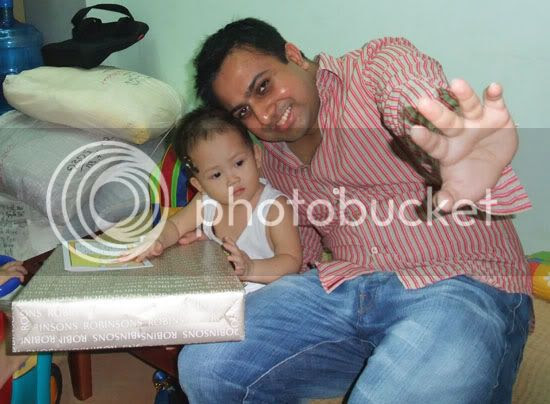 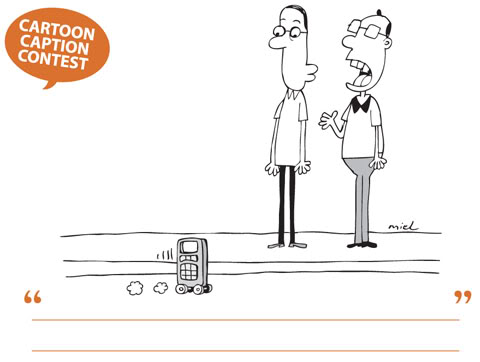 TIP: Try not to do the obvious. Think out of the box
and you'll stand a better chance at winning, like so...

The winning entry:
"Hang on... it’s roaming for a network."
- Lee Siew Beng

The shortlisted ones:
"It's my 'hands-free' cellphone. I don't hold it. It follows me."
- Varella, Gino Lee