British researchers have found that babies who suck pacifiers grow up
to have lower intelligence than babies who do not.

The university team tested the IQ of 1,000 men and women born
in Hertfordshire, England.

Participants' intelligence was measured on a scale of 50. Those who
sucked pacifiers, on average, scored 3.5 points lower than those who
abstained as infants.

The researchers made the link between their use and intelligence while
examining whether breast feeding affected intelligence.

They hypothesised that one possible reason for the association between
pacifiers and intelligence was that infants might be so pacified they are
less receptive to outside stimuli. They also suggested that pacifiers
might be used by less intelligent parents, who more than likely would
have less intelligent children. 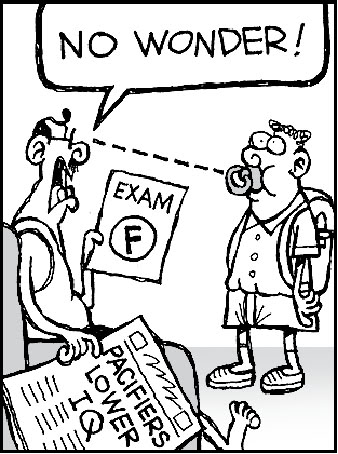