Forget about oysters and a candle-lit dinner for two. The next time you want
to get into a romantic mood, just tuck into a curry.

A British survey has found that curry can cause sexual arousal - the spicier
the curry, the greater the stimulation.

Researchers at Nottingham Trent University monitored more than 100 volunteers
up to the age of 80 and found that the taste of curry sent blood pressure and
heart rates shooting up, creating a natural "high".

It sets off biological responses and creates a feeling of stimulation.

Even the thought of eating curry was enough to trigger a response.

When the volunteers were told to expect an Indian meal, their blood pressure
went up 1.8 per cent cent and heart rate, 3.2 per cent.

When told to expect a traditional steak-and-kidney pie, their blood pressure
and heart rate was unchanged.

When the volunteers tucked into the hottest curry, their blood pressure rose
by 3.8 per cent and their heart rate leapt a massive 18.3 per cent.

When the volunteers ate roast beef and vegetables, their blood pressure rose
a mere 1 per cent and their heart rate, by just 2 per cent - and nobody
reported an increase in stimulation levels. 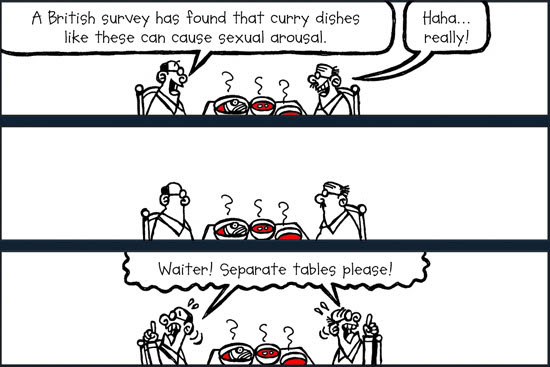