Show me the real money

If someone hands you money and the note feels too smooth,
chances are that it is fake, printed with a colour printer or photocopier.

There were 14 cases of people who tried to print fake money
this way in the first six months of 1998, double the number
for the whole of 1997, said the Commercial Crime Division.

According to the police, the rise is not significant as the
same culprit was involved in a number of the cases.
So there is little cause for alarm, said the head of the
CCD's financial fraud branch.

The counterfeit notes look similar to the real ones,
but if you feel them carefully, you can tell the difference easily.
The fake notes feel smoother and are thicker than genuine ones
because the fakes are printed on plain paper.

Both photocopiers and laser printers use similar printing technology,
which coats paper with a mix of powder dye, while ink-jet printers
use ink.

It is easier to distinguish the fakes if they were printed with
an ink-jet printer. Just rub your fingers on the notes,
and the ink will smudge.

The police said that in most cases the fake money, all Singapore notes,
were detected by banks when victims tried to deposit them.

The victims, such as hawkers and taxi-drivers,
had accepted the fake notes in haste without checking them carefully
because they were busy tending to their business.


A 17-year-old teenager and a 14-year-old girl were prosecuted
for using and making counterfeit money with a laser printer.

They had made three $50 notes. The girl used one at a McDonald's outlet
at Hougang on May 7, 1998. Later, both tried to use the remaining notes
at a coffeeshop in Geylang on two different days.

But the stallholder noticed the fake note the second time
they tried to use it.

They fled in a taxi and used the last counterfeit note to pay the driver.

By coincidence, the taxi driver returned to the same coffeeshop later
the same day and used the fake note to pay for coffee.

The teenager will be sentenced on Aug 20. The girl has been sent to
Toa Payoh Girls' Home, pending a pre-sentence report. 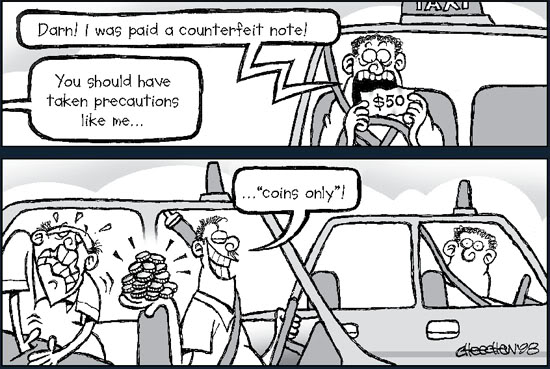