Bad debt written off by banks on credit and charge cards hit a
12-year high in June, as prolonged unemployment and dwindling
savings caused more Singaporeans to go into default.

According to the Monetary Authority of Singapore, banks here
wrote off $17.5 million in June, up from $14 million in May.

That was the highest monthly write-off since 1991.

With many white-collar workers, particularly those in their
40s and 50s, having lost their jobs, many are now unable to
pay their bills, say bankers.

During the three months ending June, banks wrote off $8 for
every $100 rolled over by cardholders at the end of each month.

A consumer is said to have 'rolled over' his card balances
if he does not settle in full the amount owed to the bank.

Banks typically write off debt as uncollectable when they have
not received any payment for six months.

As such, some card-issuers have become more stringent in
issuing new cards. Their debt-collection departments are also
more proactive in contacting card-holders who show even the
slightest hint of financial difficulty. 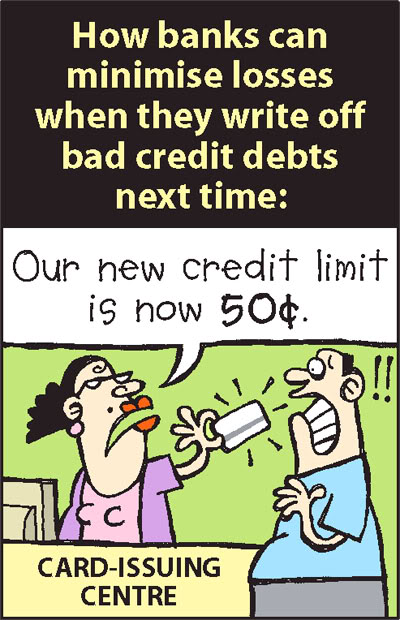