An orang-utan being studied by scientists in the Borneo jungle
developed a crush on her psychologist and tried to seduce him.

Dr Gary Shapiro, vice-president of the Los Angeles-based Orang-Utan
Foundation International, developed a close relationship with the
female, Rinnie, when he tried to teach her sign language.

"On my 27th birthday she came up to me and actually greeted me as
I swam across the river. She took me by the hand, walked me across
a dry swamp, and took me behind a tree," he said. "There, on the ground,
she had constructed a day nest which was larger than the normal.
She lay down on the bed, spread her legs and started pulling me
towards her.

"It was a very definite proposition. I signed to her 'No' and she
looked at me with those big eyes. She knew I had scorned her.
From then on she was much colder, not nearly as affectionate and just
very businesslike, though she did get over it."

Dr Shapiro, married with a wife in California, described Rinnie as
"nice-looking and good-natured as orang-utans go".

Fellow orang-utan expert Dr Birtute Galdikas was said to have
joked on Dr Shapiro's return to their camp: "Gary, you should have
done it for science." 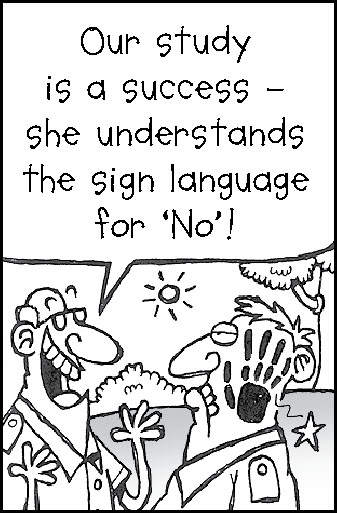