Do you feel ill on Mondays?

British scientists believe they have come up with the answer to what we
have always suspected: That going to work makes you ill. They believe
that even the mere sight of the office is enough to trigger depression,
headaches and a cold.

The classic Monday-morning feeling that makes people want to stay in bed
rather than get up for work may not be just imagination but a real ailment
triggered by the workplace.

'Triggers' could include sounds and smells, particularly in factories from
heavy machinery or flashing lights, or merely the sight of an office building.

The research, funded by the Health and Safety Executive, will also compare
levels of illness in industrial places of work with those in offices.

Companies taking part will have to keep a detailed diary over the course
of the year, recording frequency and severity of illnesses, as well as
information about jobs and type of work.

Of those taking part, a smaller group of 25 people will be asked to provide
saliva swabs, which will be tested for the chemical cortisol, a natural
steroid hormone produced in the body.

This will give researchers the means to study any chemical change in
volunteers' immune systems which may be caused by the working environment. 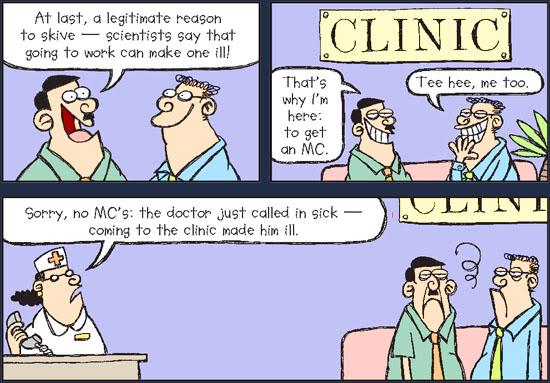