On Jan 3, 2009, The Straits Times ran a story on Thien Nhan,
written by my colleague, Judith Tan. 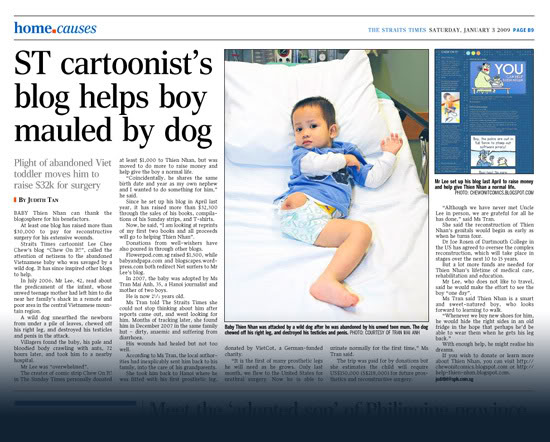 Here is the article in full:

Baby Thien Nhan can thank the blogosphere for his benefactors.
At least one blog has raised more than $30,000 to pay for reconstructive
surgery for his extensive wounds.
Straits Times cartoonist Lee Chee Chew’s blog "Chew On It!", called
the attention of netizens to the abandoned Vietnamese baby who was
savaged by a wild dog. It has since inspired other blogs to help.
In July 2006, Mr Lee, 42, read about the predicament of the infant,
whose unwed teenage mother had left him to die near her family’s shack
in a remote and poor area in the central Vietnamese mountain region.
A wild dog unearthed the newborn from under a pile of leaves, chewed off
his right leg, and destroyed his testicles and penis in the attack.
Villagers found the baby, his pale and bloodied body crawling with ants,
72 hours later, and took him to a nearby hospital.
Mr Lee was "overwhelmed".
The creator of comic strip Chew On It! in The Sunday Times personally
donated at least $1,000 to Thien Nhan, but was moved to do more to
raise money and help give the boy a normal life.
"Coincidentally, he shares the same birth date and year as my own nephew
and I wanted to do something for him," he said.
Since he set up his blog in April last year, it has raised more than
$32,300 through the sales of his books, compilations of his Sunday strips,
and T-shirts.
Now, he said, "I am looking at reprints of my first two books and
all proceeds will go to helping Thien Nhan".
Donations from well-wishers have also poured in through other blogs.
Flowerpod.com.sg raised $1,500, while babyandpapa.com and
blogscapes.wordpress.com both redirect Net surfers to Mr Lee’s blog.
In 2007, the baby was adopted by Ms Tran Mai Anh, 35, a Hanoi journalist
and mother of two boys.
He is now 2-and-a-half years old.
Ms Tran told The Straits Times she could not stop thinking about him
after reports came out, and went looking for him. Months of tracking later,
she found him in December 2007 in the same family hut -- dirty, anaemic and
suffering from diarrhoea.
His wounds had healed but not too well.
According to Ms Tran, the local authorities had inexplicably sent him
back to his family, into the care of his grandparents.
She took him back to Hanoi where he was fitted with his first prosthetic
leg, donated by VietCot, a German-funded charity.
"It is the first of many prosthetic legs he will need as he grows.
Only last month, we flew to the United States for urethral surgery.
Now he is able to urinate normally for the first time," Ms Tran said.
The trip was paid for by donations but she estimates the child will require
US$150,000 (S$218,000) for future prosthetics and reconstructive surgery.
"Although we have never met Uncle Lee in person, we are grateful for
all he has done," said Ms Tran.
She said the reconstruction of Thien Nhan’s genitals would begin as early
as when he turns four.
Dr Joe Rosen of Dartmouth College in the US has agreed to oversee the
complex reconstruction, which will take place in stages over the next
10 to 15 years.
But a lot more funds are needed for Thien Nhan’s lifetime of medical care,
rehabilitation and education.
Mr Lee, who does not like to travel, said he would make the effort to
see the boy "one day".
Ms Tran said Thien Nhan is a smart and sweet-natured boy, who looks
forward to learning to walk.
"Whenever we buy new shoes for him, he would hide the right sides in an
old fridge in the hope that perhaps he’d be able to wear them when he gets
his leg back."
With enough help, he might realise his dreams.


That same day, two little girls dropped by my workplace and handed me a
get-well card which they have made for Thien Nhan: 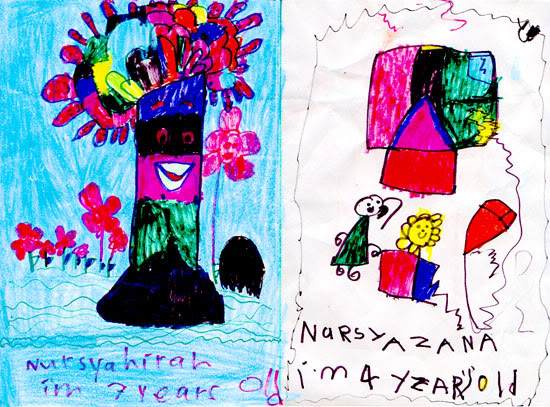 Thank you, Nursyahirah & Nursyazana. I will mail it to Thien Nhan on your behalf.