Singapore Police are on the lookout for a new weapon available to
international hijackers and terrorists -- the micro-gun.

A police spokesman said the new weapon looks like an ordinary keychain.
It is 7cm long and 3cm wide, and has a ring on the end. But this .32 calibre
micro-gun is lethal if it falls into the wrong hands.

It can fire just two shots, but these can kill. The weapon is effective from
a distance of up to 20 m.

The weapon could be made in Bulgaria.

The international police agency, Interpol, alerted its 177 member countries,
including Singapore, to the new weapon.

It is an offence to carry or discharge unlicensed firearm in Singapore.

Checks have been stepped up at all entry and exit points to catch those
bringing in the micro-gun. 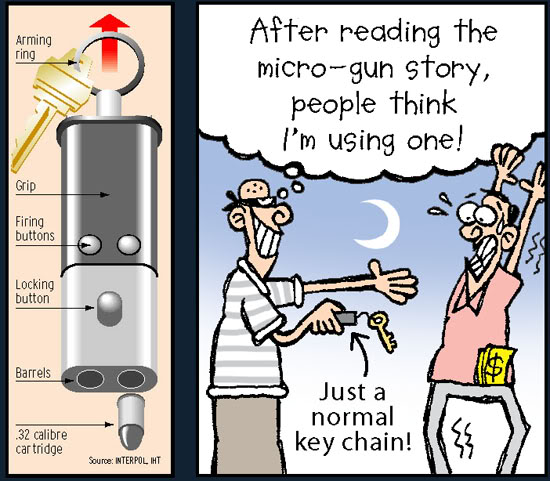