Didn't make it to print

When the year 2009 came to an end, my colleagues and I were assigned
to do a cartoon spread on the 10 most quirky stories throughout the decade.
I picked the years 2004 and 2007. Unfortunately, the project was scrapped
at the last minute. But, as a token of appreciation to you for taking
time to visit my site, I shall now present my unpublished toons:

2004
A banana half-eaten by a British TV presenter Kate Garraway sold for
£1,650 (S$5,200) on eBay. Mr Jamie Falarczyk, who works for an online
brokerage company and won the bid among some 30,000 people,
said he would display the fruit in the office to "boost staff morale".
Sounds like a rotten deal, but at least the money went to charity. 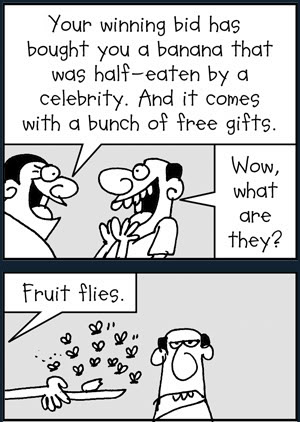 2007
A cat's knack for predicting death made it into the New England Journal
of Medicine. Oscar, a two-year-old male feline, would sniff and observe
patients at a nursing home in Rhode Island, USA, then sit beside people
who would end up dying in a few hours. It predicted 25 deaths.
For its efforts, Oscar received a wall plaque publicly commending its
"compassionate hospice care". 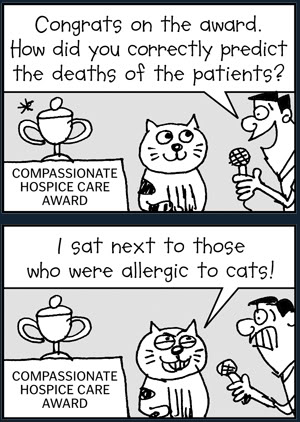 Okay okay, the cat's not evil at all. I made that up for comic effect.
Here is a pic of the real thing (everyone together now: "Awww..."): 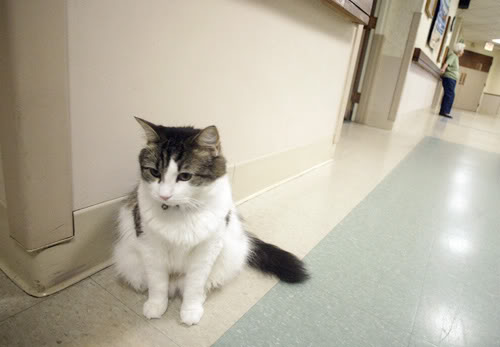