Marriage algebra tells if 1 + 1 will split into 2

A mathematician says he can predict with almost total accuracy
which newly wed couples will enjoy a happy marriage --
using two lines of algebra.

Professor James Murray says the two formulae he devised
have a 94% success rate when it comes to forecasting
whether a couple will stay together.

The formulae were calculated during a 10-year study of 700 couples
in the United States conducted by Prof Murray, a mathematics
professor at the University of Washington in Seattle.

The experiment, conducted with the help of a psychologist,
involved observing the couples during a 15-minute conversation
when they were newly married, Prof Murray said.

A couple's ability to communicate on subjects such as sex,
child-rearing or money was measured using a scale that gave
positive points for good signals, such as smiles and
affectionate gestures, and negative points for bad signals,
such as rolling of the eyes, mockery and coldness.

"We used an accepted psychological scoring system to
award them points, such as minus three for scorn and
plus two for humour," Prof Murray said.
The points were then converted into algebraic terms,
enabling the study's authors to make divorce projections.

The results were fed into two equations.
The equations were used to calculate the compatibility
of the couples by adding a series of other variables such as
an 'influence function' that differed for each couple.
The 'influence function' measured how much someone's
contribution to the conversation dictated the mood of
his or her spouse.

The couples were tracked every two years and the model
predicted which marriages failed with almost complete accuracy.

Prof Murray said: "I was absolutely astonished.
The key thing that comes out of it is that we have been able
to calculate how people interact. For example, the wife
might be a conflict avoider and the husband might be volatile.
That marriage would not survive."

But positive things can be taken from the formulae, he added.
"It points out why some people are having problems and
can show what action has to be taken to save the marriage," he said. 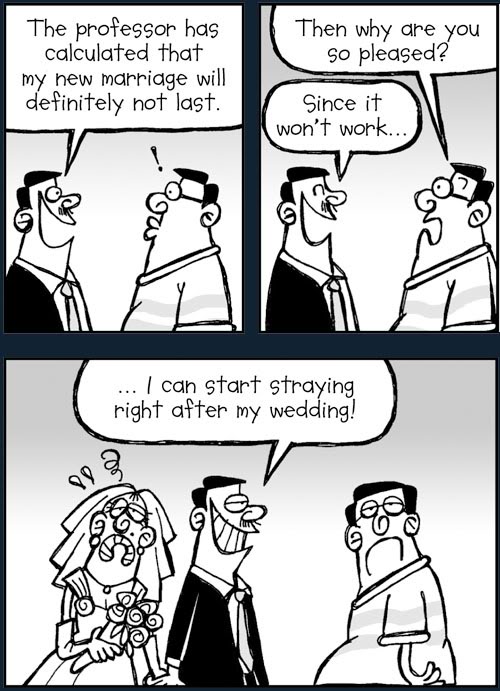