A device which can send 50,000 volts through a car steering wheel
and along the grasping fingers of a criminal has gone on sale in Britain.
The Auto Taser looked like an ordinary steering lock but acted as
a highly-charged deterrent.

The system, at first glance, looks like a traditional steering wheel lock.

If a thief breaks into the car, he triggers a loud alarm intended to
frighten him off and alert people nearby.

Five seconds after the alarm goes off, the device arms itself from three
nine-volt batteries, giving off a visible electric "arc".

Anyone grabbing the wheel or the lock will suffer a shock. The manufacturer
insists that involuntary muscular contractions will force the thief
to pull away his arm rather than endure a continuous shock. 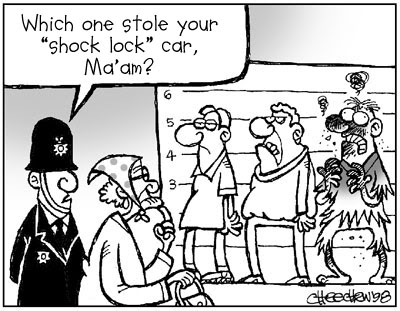 Hmm... what happens if there is an authorised removal
of the vehicle in an emergency?